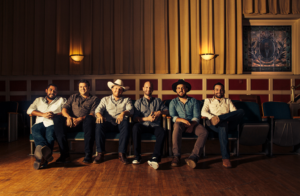 When Josh Abbott Band recorded “Ghosts” for its fourth album, Front Row Seat, Abbott expected to redo the vocals. The final chorus had some technical imperfections, and he figured he could improve on the performance once his heart settled down. Producer Dwight Baker, one-half of the Austinbased duo The Wind and The Wave, wouldn’t let Abbott retouch it.

“I was actually crying my eyes out during that last chorus, and that’s why there’s a couple of notes in the beginning of that section that don’t really explode like normal,” Abbott says. “Dwight was like, ‘We’re keeping that. That’s real.’”

Real is the operative word for Front Row Seat, a 16-track song cycle that represents the most ambitious and emotionally challenging project yet for JAB, a highly melodic six-piece ensemble that’s managed to keep a foot in both the Texas music scene and the national country world. The band won four times during the inaugural Texas Regional Radio Awards behind an upbeat brand of country that still leans on classic instrumentation – particularly banjo and fiddle – to effect a raucous, roof-raising attitude.

The band has lobbed three singles onto the Billboard Hot Country Songs chart – including “Oh, Tonight,” the first charted track to feature Grammy-winning Kacey Musgraves – and nabbed a Top 10 album with the 2012 release Small Town Family Dreams and reached No. 12 with the 2014 EP Tuesday Night.

But Front Row Seat steps beyond the band’s honky-tonk inclinations for a more personal journey as the album traverses the emotional course of Abbott’s first marriage and subsequent divorce. It was not his original intention to depict his private life in a public way, but as he wrote the songs for Front Row Seat, beginning before the split actually occurred, he naturally mined his emotional life for a set of songs that were profoundly honest and revealing. It was only as they began recording the material at Baker’s Matchbox Studios outside of Austin, that they realized they had the germ of a tangible plot.

“We started looking at the music we’d done and had a whole bunch of other songs that we really loved and we were like, ‘Man, we could put this together and make a really neat story out of it,” fiddler Preston Wait recalls. “Especially with the song ‘Front Row Seat,’ we basically just made it kind of like you’re watching a movie and it’s your front row seat to this life.” Owing to that silver-screen character, JAB employed screenwriting technique by assembling the project with the five elements of plot structure: the exposition, or beginning; an inciting incident; the climax; a falling action (in this case, a breakup); and the resolution.

The story begins with “While I’m Young,” in which a college-aged Abbott lives a typically carefree existence, spending much of his discretionary income in bars and living for the moment, an ideal that’s captured authoritatively in the anthemic “Live It While You Got It.” As the album progresses, he meets a woman who commands his attention for more than one evening, finding himself by track 7, “Crazy Things,” mulling what it is that would make a woman who’s dang-near perfect fall for someone so flawed.

By the time the album concludes, his once-ideal relationship has turned sour, and the two are no longer one. The fracture becomes apparent through the resignation of “Born To Break Your Heart,” and he discovers in “Ghosts” that all the memories that once lived with such passion and revelry continue to haunt his memory, taunting him with whispers of a past he can never reclaim. As Front Row Seat closes with “Anonymity,” Abbott sings a spare dirge with acoustic guitar and fiddle, fantasizing that he could return to the start of the relationship and live it out right.

“When you’re moving on from somebody, even once you’ve accepted it, you just feel alone,” Abbott observes. “That’s the reason the acoustic track ends the album.”

Even though Front Row Seat represents an ode to a failed relationship, it also marks what Abbott expects to be the beginning of a new phase for JAB. One of Texas’ best party bands, the group evolved heavily in the process of making the album. The players fully committed to a darker sound and gave even more prominence to Wait’s fiddle and Austin Davis’ banjo, highlighting the trad-country elements in the lineup while still infusing the influence of multiple genres in its sonic drama.

“When you get to the end of this album, you see a band that grew up before your eyes – like literally front to back, a band that sonically changed,” Abbott says. “You never want to make the same album multiple times, and you never want to sound the same your entire career. You know, you look at The Beatles and you look at all these other great bands, they tweaked their sound over time, and I think you’re gonna start to see us do that a little bit more.”

While JAB is truly a group, the name is centered on Abbott – the lead singer, primary songwriter and band namesake – with good reason. He is a determined force of nature, and his ability to lead – to, in essence, turn something small into something much bigger – has been a hallmark of the band since its inception.

That start came in the mid-2000s when Abbott and frat brother Davis showed up for a few informal gigs at the Blue Light Live in Lubbock, Texas. “We played two open-mic nights, and we had two songs, no band. Just him and me,” Davis recalls. “I walk in the back, and Josh is talking to the owner and the manager about doing a live record there. And I’m thinking, ‘We don’t even have a band.’ His thing was, ‘We’ll get to that later.’ He’s always thought that way. I’ve played in other bands but never saw anybody else with that kind of confidence.”

Wait and drummer Edward Villanueva showed up a year and a half later, and in short time, JAB’s first single – “Taste,” self-released on Pretty Damn Tough Records – found a home on Texas radio stations. Bass player James Hertless and lead guitarist Caleb Keeter came on board circa 2010, and the lineup has stabilized for the past five years.

“Any movie you see about a band, it’s like five or six kids that are best friends,” Wait says. “Growing up, that’s kind of what you think it’s gonna be like. I found that in this group.”

The friendship is built on constant touring. Texas alone keeps the band steadily employed, but Abbott and crew have built a wider concert base that includes such iconic venues as Nashville’s Exit/In, Chicago’s Joe’s Bar, Washington D.C.’s 9:30 Club, Denver’s Grizzly Rose and Los Angeles’ Troubadour. The audience has grown in part because of the singability and relatability of the Abbott Band’s material, which has always held something of an everyman appeal.

As personal as Front Row Seat is, the album has a ring of familiarity. Nearly everyone has messed up a relationship or had their heart broken. It’s practically a rite of passage, and Abbott’s willingness to tear down the walls and bare his heart lifts the project to a new level of connection with the band’s growing audience.

“I know there’s going to be a natural reflection on me and how the album mirrors my life,” Abbott concedes. “But I’d like to think that this is really a story that is so common that everyone relates to it and that it’s not just about me. Hopefully people can listen to it and feel like it’s about them.”

It’s about the band, too. Villanueva used a bigger drum kit in recording Front Row Seat, laying a little more power underneath. And Wait and Davis take a more prominent role in the sound, heightening the country and bluegrass sides of the group without harming its modern texture.

“When we come up with parts, it’s difficult because it’s not standard bluegrass, like Flatt & Scruggs,” says Davis. “You’ve got to do something different. It pushes you to try and make something new.”

There’s certainly plenty new in Front Row Seat for Josh Abbott Band. The ethereal lyrics in “Autumn” and “Anonymity” are a starting place as Abbott’s songwriting challenges country’s tendency toward literal interpretations and storylines. The band also works for the first time with Carly Pearce, who provides a powerhouse female presence on “Wasn’t That Drunk.” Assembling the project as a concept album with a distinct storyline is another new approach for JAB. The tormented lead single, “Amnesia” – with its snarling guitar solo and artsy, unsettling intro – is yet another new technique.

Those wrinkles in JAB’s development demonstrate the band’s willingness to explore new turf, tapping musical character that might have gone unexpressed in its earlier projects. But people don’t build character during the easy times. It comes when they’re tested by the hurts and pitfalls that accompany any successfully lived life. Abbott, as the leader of the band, is emerging from one of his toughest tests to date. He and the band used an ultra-honest approach to the hard times to take the next step as it moves into its future. “The whole band embraced this project and really committed to not only make it sound incredible but sound different and better,” Abbott says. “It’s more mature than anything we’ve done in the past.”
More mature because it’s so honest. And so real. 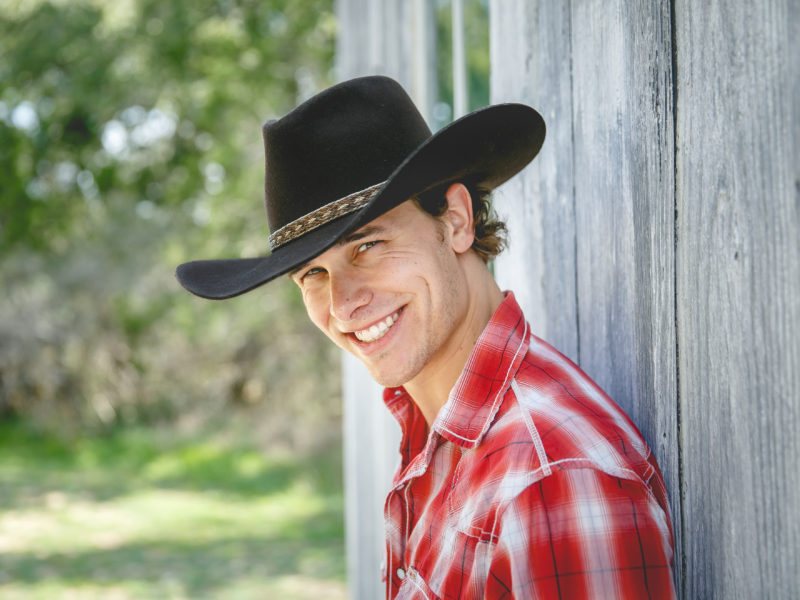 Randall King grew up on the plains of West Texas in Amarillo, influenced by Country artists both legendary and new. Heroes such as Hank Williams, George Jones, Merle Haggard, and George Strait – along with Texas/Red Dirt icons Wade Bowen & Cody Johnson – heavily influenced his craft. Randall moved to Lubbock in the fall of 2009, where he began brewing his own, unique songwriting blend. King and his crew have been working in Ft Worth, TX with Bart Rose at Ft Worth Sound narrowing in on the true country sound of Randall’s songwriting. “The Problem”, the lead single off the upcoming E P- “Another Bullet”, is a direct reflection of King finding himself and his modernized neo-traditional/honky-tonk style within his music. The EP drops May 20th 2016, so look out. Country is back. 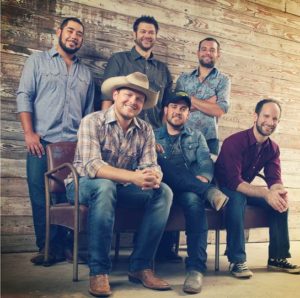